Zheng Zhi has become the first Chinese player to be named AFC Player of the Year since Fan Zhiyi claimed Asian football’s highest individual accolade in 2001.
Guangzhou Evergrande skipper Zheng, who collected the prestigious award from AFC President Shaikh Salman bin Ebrahim Al Khalifa,  led by example throughout the Chinese side’s victorious AFC Champions League campaign, with the 33-year-old’s assured performances throughout the tournament as well as his telling contribution in China regaining their consistency following the departure of Jose Antonio Camacho and moving to within one point of qualification for the 2015 AFC Asian Cup.The decision to award the former Celtic and Charlton Athletic midfielder the 2013 AFC Player of the Year award ahead of Iran star Javad Nekonam and Korea Republic’s Ha Dae-sung marks something of a reversal of fortune for Zhang, after he had to settle for third last year behind Iranian legend Ali Karimi and recipient Lee Keun-ho. 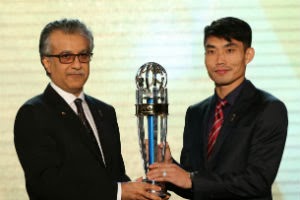 "I am very excited..after coming last year without award its very special this time….there is a special feeling of winning this award at the age of 33. It’s a big occasion for me to win this award," Zheng said after winning the coveted trophy.
"This season has been fantastic season not only for me but the whole teammates,...we are looking for the unique treble after winning the ACL and the league so it's been a memorable one.
"Marchello Lippi has made the club more matured and confident and we know our strength and weakness more than ever.
"Honestly, I thought that I would not win award again after I was confined of being only nominee last year but it’ s down to my teammates without whom it would have been impossible to win this again.
"I am not young anymore but I still have desire to produce my best not only for the club but for my national team as well.
"Actually there are lot of talented players in the club and national team coming through the ranks, they are the future of Chinese football. I would continue playing with my national team but at the same time hope that more youngsters break in at the national fold.
“Next year will be quite difficult but we will keep on working hard and win more laurels to Guangzhou Evergrande."  -AFC.
Posted by Fair Play at 3:14 PM No comments:

FIFA and France Football have today (29 Oct) revealed the names for the men’s awards.
The candidates for the FIFA Ballon d’Or and for the FIFA World Coach of the Year for Men’s Football awards have been unveiled (see below). The final decisions will be made by the captains and head coaches of the men’s national teams as well as by international media representatives selected byFrance Football.
The winners of all of the awards will be revealed at the FIFA Ballon d’Or as part of a televised show at the Zurich Kongresshaus on 13 January 2014, during which the FIFA FIFPro World XI, the FIFA Puskás Award – for the most beautiful goal of the year – the FIFA Presidential Award and the FIFA Fair Play Award will also be presented.
The list of 23 male candidates has been drawn up by football experts from the FIFA Football Committee and by a group of experts from France Football. The list of ten coaches has been drawn up by the Committee for Women’s Football and FIFA Women’s World Cup and by the FIFA Football Committee, as well as by a group of experts from France Football.
In early December 2013, FIFA and France Football will announce the names of the three men and three women, as well as the three coaches for women’s football and three coaches for men’s football, who have received the most votes (without unveiling the winners). The three nominees for the FIFA Puskás Award and the FIFA FIFPro World XI shortlist for the best forwards, goalkeepers, defenders and midfielders will also be  unveiled in early December.
Men’s shortlists for the FIFA Ballon d’Or 2013
The following 23 men (in alphabetical order) are in contention for the FIFA Ballon d’Or 2013:
Gareth Bale (Wales), Edinson Cavani (Uruguay), Radamel Falcao (Colombia), Eden Hazard (Belgium), Zlatan Ibrahimović (Sweden), Andrés Iniesta (Spain), Philipp Lahm (Germany), Robert Lewandowski (Poland), Lionel Messi (Argentina), Thomas Müller (Germany), Manuel Neuer (Germany), Neymar (Brazil), Mesut Özil (Germany), Andrea Pirlo (Italy), Franck Ribéry (France), Arjen Robben (Netherlands), Cristiano Ronaldo (Portugal), Bastian Schweinsteiger (Germany), Luis Suárez (Uruguay), Thiago Silva (Brazil), Yaya Touré (Côte d’Ivoire), Robin Van Persie (Netherlands), Xavi (Spain).
The following ten coaches (in alphabetical order, first nationality and then team) are in contention for the FIFA World Coach of the Year for Men’s Football 2013:
Carlo Ancelotti (Italy/Paris Saint-Germain FC/Real Madrid CF), Rafael Benítez (Spain/Chelsea FC/SSC Napoli), Antonio Conte (Italy/Juventus), Vicente Del Bosque (Spain/Spain national team), Sir Alex Ferguson (Scotland/Manchester United FC former coach), Jupp Heynckes (Germany/FC Bayern München former coach), Jürgen Klopp (Germany/Borussia Dortmund), José Mourinho (Portugal/Real Madrid CF/Chelsea FC), Luiz Felipe Scolari (Brazil/Brazil national team), Arsène Wenger (France/Arsenal FC)._FIFA.

More great news for football fans in the on-going 41st Merdeka Tournament in Kuantan!
The Football Association of Malaysia is offering a further reduction in ticket prices for matches at the Darul Makmur Stadium in Kuantan and Temerloh Stadium for the Merdeka Tournament - ’s most prestigious tournament.
Tickets for the match between and at the Darul Makmur Stadium on Wednesday, September 11, 2013 (kick-off 8.45pm), are priced at RM20 (free seating) and RM50 (grand stand).

However, tickets for the Myanmar versus Singapore match (kick-off 8.45pm) on Wednesday, September, 11, 2013, at the Temerloh Stadium are available at RM20 (free seating) and RM25 (grand stand).
The prices of tickets for the final on Saturday, September 14, 2013, at the Darul Makmur Stadium will remain at RM20 (free seating) and RM50 for grand stand.


“Malaysia have already qualified for the final and having discussed with our commercial partners, we have agreed to reduce ticket pricings to give an opportunity to fans to come and support  Malaysia tomorrow in the last group match at the Darul  Makmur stadium and also in the final,” said Dato’ Hamidin in Kuantan., Tuesday (10 Sept).
Posted by Fair Play at 2:55 PM No comments:

A well-taken freekick from Shahnaz Yaseen Mahmoud Jebreen gave a 1-0 win over as they took the lead in Group A of the AFF Aya Bank Women’s Championship here at the Youth Training Centre in , Monday (9 Sept).
In an evenly contested affair, the Jordanian girls scored the only goal of the game off Shahnaz Yaseen eight minutes to the end.
Both teams showed quality to play good attacking football with the better side in the first half as they hit the post twice off Angela Kais and Dadree Rofinus.
replied with a freekick from Yasmeen Salim Khair two minutes after the restart which forced a scrambling save from ’s Asma Junaidi.
A minute later Nosuraini Mazli should have given the lead but despite being unchallenged, she blasted the ball straight to keeper Zina Al Sadi.
The change for Shahnaz in place of Abeer Mahmoud Alnahar in the 80th minute gave more pace and just two minutes later, she put them in front with a superb freekick to beat Asma for the full points.
RESULTS – Group A
0 0
1 0
Group A Current Standings

SELAMAT DATANG...WELCOME. Read and be happy.

Thank you for visiting my blog. Through this blog I hope to share some thoughts, reproduce my writings in Utusan Malaysia, Kosmo and other publications and also to inform you about the happenings of my favorite past time - sports. You can read, but do not publish any contents with my written permission. What I have written, is to my best knowledge the truth. Mistakes do happen and I apologize if ever it does. God Bless You

Fair Play
I became a journalist on 1st June 1982. Started of as a cadet reporter and then went on to be Chief Reporter, Assistant Sports Editor, Sports News Editor and finally Sports Editor before I stepped out of the news room on 1st November 2000. Been to many places, covered many games, matches and events and wrote plenty of commentaries.